This is a stunning ‘Pompeji / Pompeii’ handled vase, made by Ruscha Keramik, West Germany circa late 1960’s.

With its ‘Fat Lava’ glaze complementing the archaic look, it could have been unearthed from volcanic ashes!
With its bubbling black base glaze, picked out with orangey reds and hints of green and yellow giving a really lava-like appearance and suiting its ‘Pompeii’ name in the process. The decor is most likely by Otto Gerharz who developed the innovative ‘Vulkano’ glaze amongst many others.

Would make a fantastic addition to any collection of Fat Lava, West German or European pottery, and would complement any retro, vintage, mid century, modernist, brutalist, minimalist or contemporary interior.

Indistinct moulded mark to the base ‘875’.

In excellent condition, no chips or cracks, some burst ‘lava’ bubbles from production.

This vase is available for sale in my Etsy shop http://etsy.me/1AlRjzu 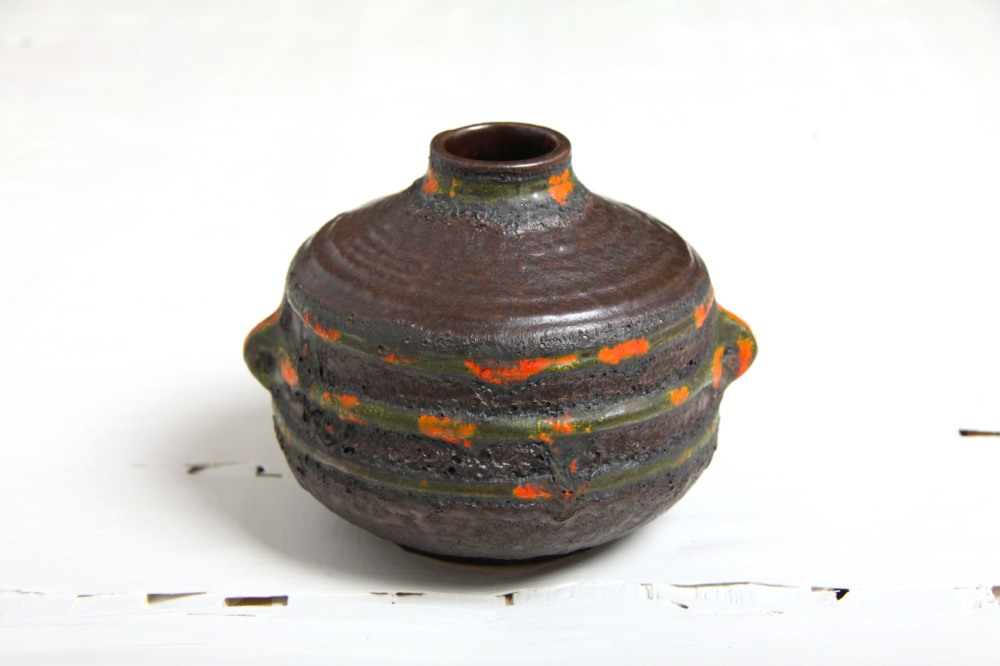 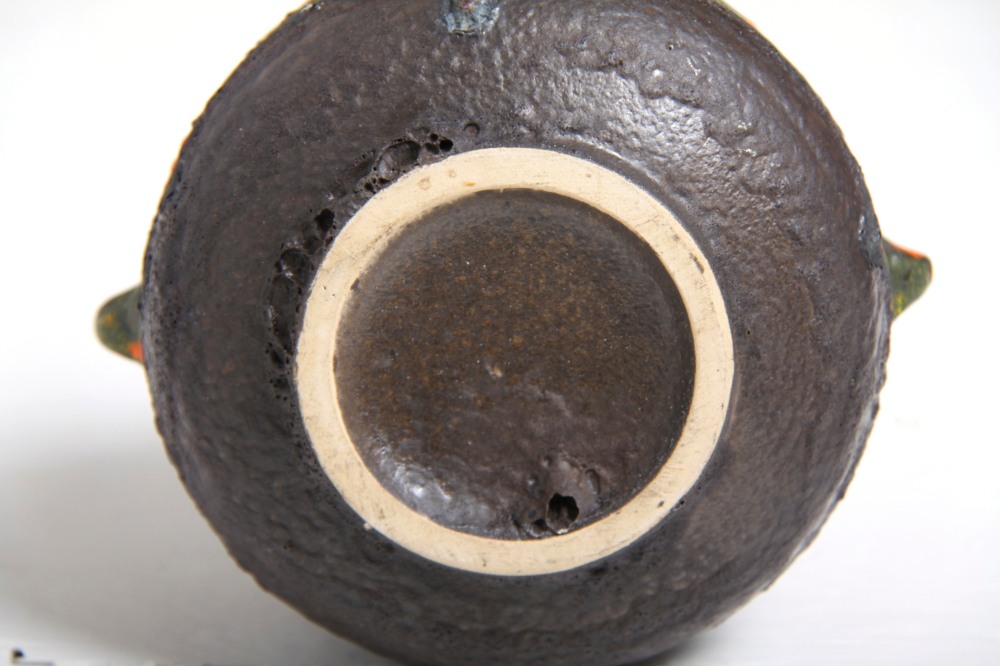 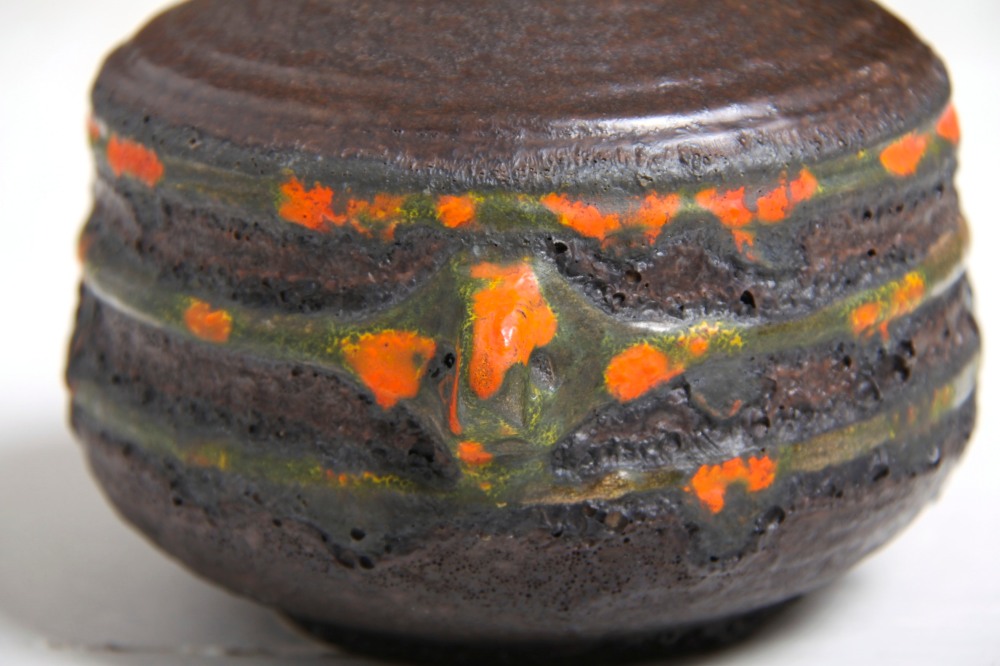 This is a Stunning Rare and Unusual Ruscha Keramik vase 320/2, West Germany circa 1960’s.

Ruscha was founded in 1948 by Rudolph Schardt and produced high quality pieces, they were renowned for their early experiments with glazes such as the ‘Vulkano’ glaze from 1959 one of the first ‘Fat Lava’ glazes.
This classic stylish form was designed by Heinz Siery, the bulbous body topped with a beautifully proportioned decorative handle and small neck.

The mottled matte glaze has turquoise, blue , grey and black colours and a fine pumice like texture. The motifs are tube lined in black and suggest stylised Japanese characters. Giving a very Mid Century Modern Oriental / Asian inspired look to the vase.

Would make a Great addition to any collection of West German / Fat Lava / European pottery, and would complement any retro, vintage, mid century, 60’s, minimal or contemporary interior.

In Excellent Condition, no marks, chips or scratches, there is one small hole in the tube lined glaze, probably from production, in the last photo.

Marked to the base 320/2 with indistinct stamped black lettering. 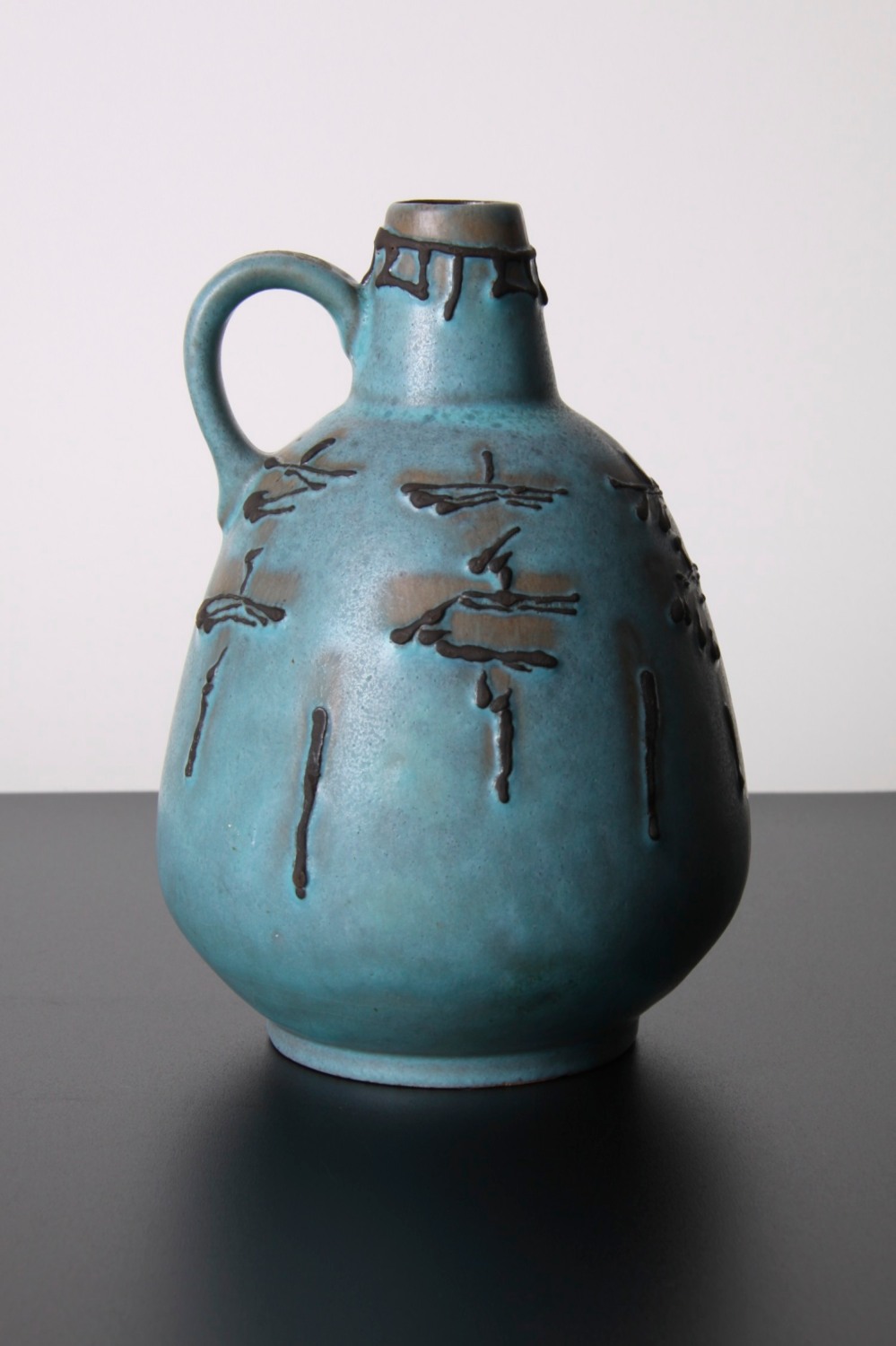